Select the direction, and the year, you would like to travel. 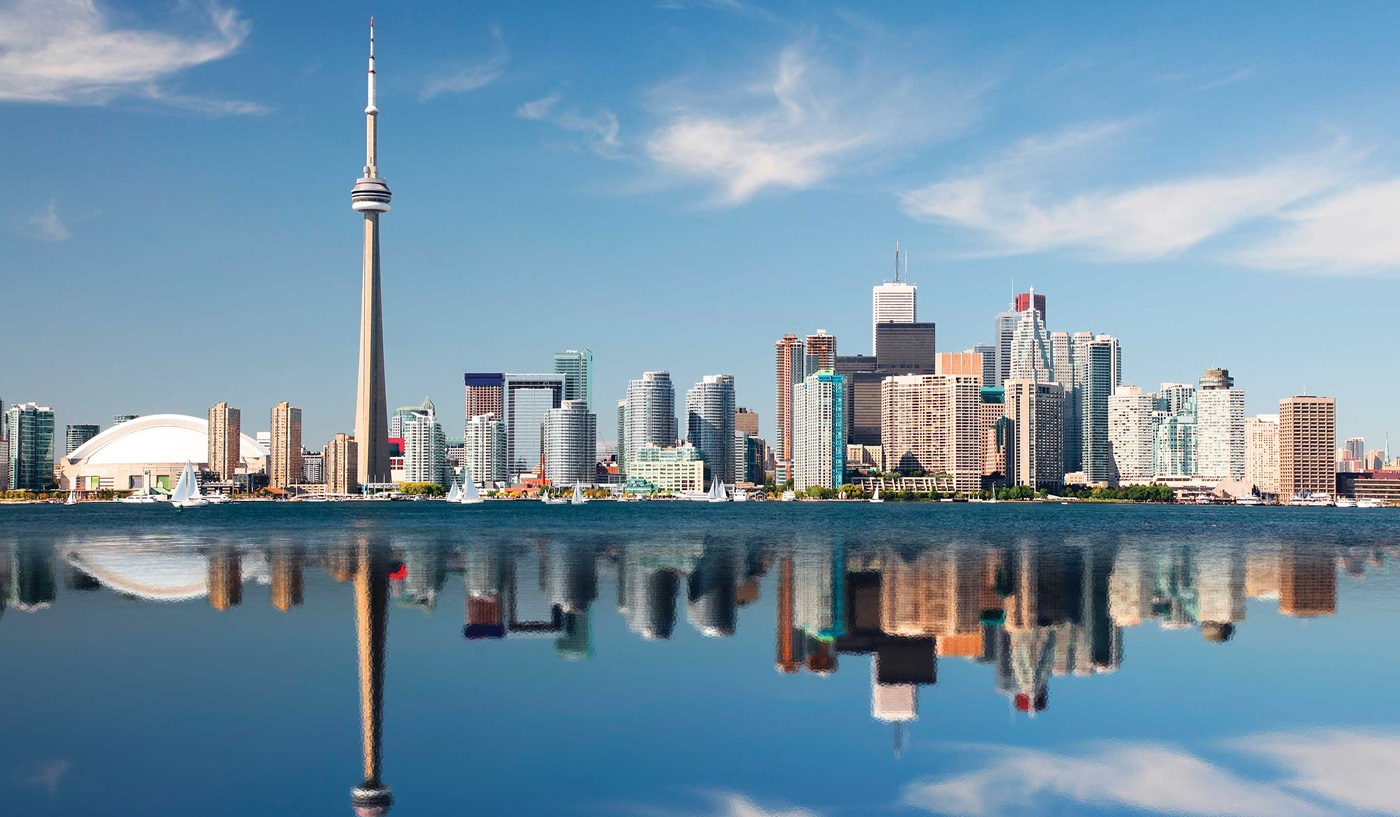 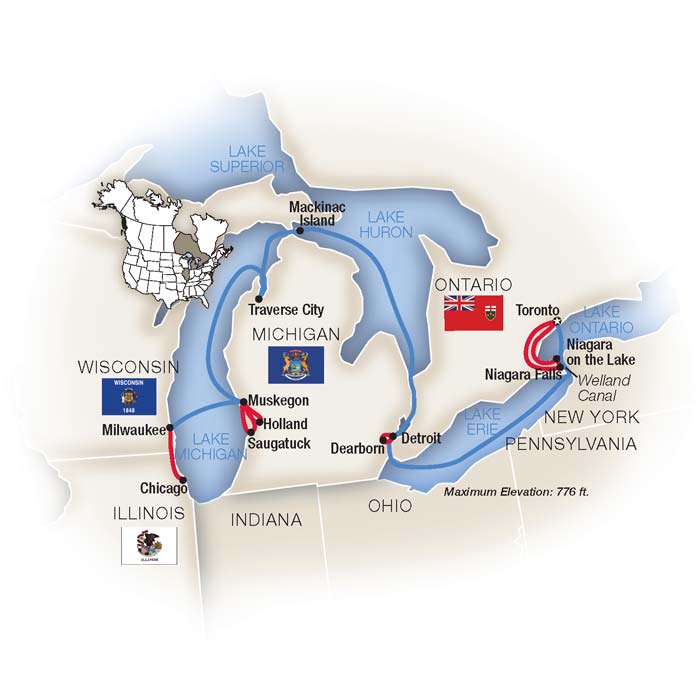 Private reception and dinner at Casa Loma, a neo-Gothic castle in Toronto

Guests should be able to easily walk one to two miles, which may include climbing one or two flights of stairs and walking over uneven pavement, groomed hiking trails or cobblestones. Standing up to one hour or more may be required.

Moderately paced, and may include some early morning hotel departures, one or two on-tour flights, and extended motor coach travel.

The mighty Great Lakes have played a vital role in the history and cultural fabric of North America for centuries... and our new 12-day small ship cruise invites you to explore their storied waters – and some of the unique cities and towns that have grown along their shores

See for yourself what Small Ship Cruising is all about

The majesty of Niagara Falls

Experiencing the thunder of Niagara Falls on the US-Canadian border

North America's most powerful waterfall – and one of its most famous and often-visited natural treasures – Niagara Falls actually comprises three distinctive waterfalls on the Niagara River, perched on the border of Ontario, Canada and New York. Every minute, some six million cubic feet of water plunges over the crests of the Horseshoe, American and Bridal Veil Falls and tumbles down nearly 200 feet into the rocky gorge below into a thundering cauldron of water and mist. Experiencing the raw power of Niagara Falls firsthand is something you'll never forget... and just what you'll do as you first view the falls from a panoramic spot high above... then don a hooded raincoat and board a private boat for an up-close – and very wet – encounter with this iconic "wonder of the natural world." Journey to Niagara Falls today, three distinctive waterfalls perched on the border of Ontario, Canada and New York. View the falls from high above as the water plunges, thenas you board the Maid of the Mist for

A marvel of engineering two centuries in the making...

Comprising eight locks that enable ship traffic to travel between Lake Erie and Lake Ontario by bypassing the Niagara River and Niagara Falls, the Welland Canal is a 200-year engineering marvel that actually represents four successive canals. Originally designed and built in the 1820s, a second canal replaced it in the late 1840s, and a third opened in 1887. The construction on the fourth and current Welland Canal – which your ship on "Cruising the Great Lakes" will traverse in about 11 hours, accompanied by an expert guide – began before World War I was not completed until 1932 and expanded some 40 years later.

Step back in time on Michigan's Mackinac Island

Vehicle-free Mackinac Island – off the Michigan coast in the Straits of Mackinac connecting Lakes Michigan and Huron – has been a popular retreat since 19th-century industrialists built imposing summer “cottages” here, and remains serenely lost in time. The only way to get around is by foot, bicycle, or horse-drawn carriage, as you make your way past impeccable Victorian mansions and out to the fringes of forest, marshes, beaches and 19th-century Fort Mackinac. The island is home to the palatial Grand Hotel, which lays claim to the longest porch in the world. Since 1887, the Grand has hosted many presidents, as well as the likes of Mark Twain and Thomas Edison (who first demonstrated his phonograph on the hotel’s iconic porch).

Take The Details With You

All the information you need to begin your travel plans is right at your fingertips – day-by-day details, map, hotel descriptions, key highlights, and more; download, print or share and your cruise dreams become reality!

Download, print or share deck plans and additional information for your vessel, such as specifications and cabin descriptions.

Receive a quote for your journey of choice based on departure date, including cabin category if applicable, that you can quickly download to take with you or share..

All Inclusive, One Upfront Price

Distinctively "inclusive" means just that – virtually every cruise cost is included in one upfront price, from shore excursions (private to Tauck), all gratuities, premier hotels on land stays, port charges and more. There are no options sold – no extra charges, no hidden costs, no "surprise" expenses.

The choice is yours... We’re pleased to present an opportunity to customize and personalize your cruise by choosing your shore excursions on select days; choices have been carefully designed to appeal to different interests and preferences, with more active choices available on many days. 90 days prior to your departure date we'll contact you with the information you need to make your selections!

Traveling with Tauck ensures more than a memorable travel experience; it also enables you to take advantage of additional do-it-for-you travel services that take the hassle out of arranging them yourself. As an added service, we can make flight arrangements for your journey, if your travels originate in Canada or the United States, offering you a number of welcome advantages. With Tauck, you can reserve your flights now and pay later when tickets are issued; benefit from Tauck’s lenient change and refund policies; earn Frequent Flyer mileage on most airlines; and more.

What you need to know

No matter where your destination may be, you should bring identification with you; a valid passport is always an appropriate form of identification. Contact your booking agent for information about all necessary documents required for your journey, such as passport and visa information or documentation required for transportation security measures.

You'll find Activity and Pace Levels on all of our trips to give you a better idea of physical activity level – higher numbers mean a more active journey. To fully enjoy most journeys, you should be in good health and able to walk reasonable distances; some of the most memorable sightseeing can only be accomplished on foot and may include unpaved and uneven surfaces. Please consult your physician for pre-departure health advice.

Your cruise is an important investment – and to help you protect it, Tauck's Cruise Protection Product provides you with important benefits before your trip and while you are traveling, including 24-hour worldwide emergency assistance services; you'll also find deposit details and information should you have to cancel. Truly peace of mind travel at its best! 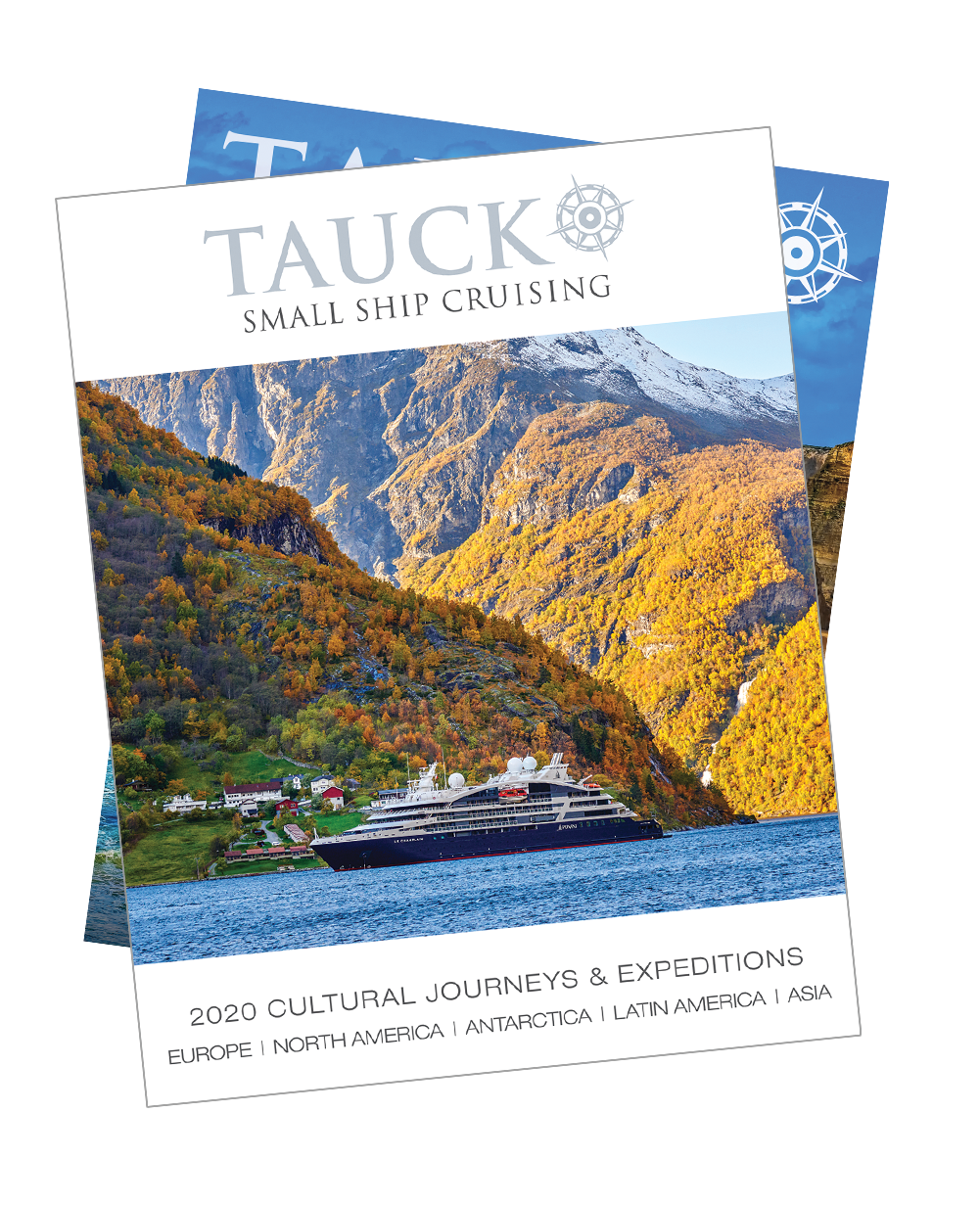 To help you plan your trip, here's an overview of average temperatures, weather conditions, and what you might expect from Mother Nature.

Take a look at some general travel information that will be helpful to you as you plan your Tauck journey.

Other Journeys You May Enjoy